Good morning Bloggers, I hope all is well with everyone.
I had a lazy day on Sunday and went out hither and thither and of course I happened upon a craft shop ;o)
One of my new toys was a pair of Tim Holtz tree embossing folders and I love them! Here are two very simple cards made using them. 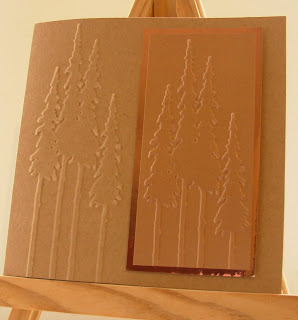 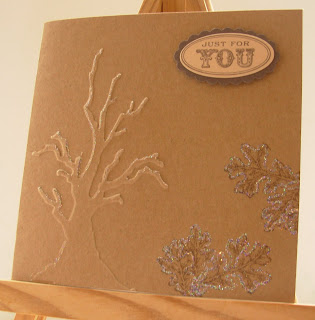 I used Papermania card blanks, yes, shock horror, you did read that right, I actually bought a set ofcard blanks and envelopes instead of folding my own and they are kraftcard and they are fab! The only other materials/tools I have used are SU stamps and a scrap of copper mirri card from stash. I will upload cards made using another of my new toys another day.
I hope you have all had a fabulous BH weekend :o)
Jackie xx
Posted by Jackie at 07:12 12 comments:

Good morning Bloggers. Bank holiday weekend or not I have to work today and Monday, but I hope you all have a great weekend and that it's not too wet for you :o)
I have been steadily making Christmas cards since January but I realised that all of a sudden it's just around the corner and I have nowhere near enough cards ready. For that reason I settled on one stamp heat embossed in different colours to make several simple cards, all 7x5 - 6 complete so far but another 10 to put together! 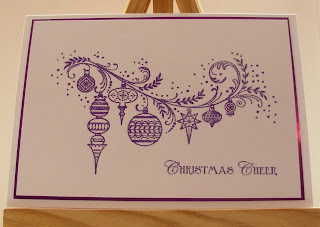 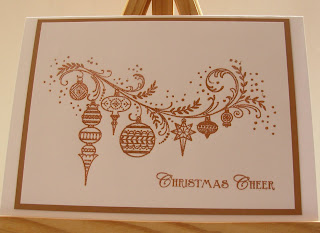 I am doing 2 of each colour, the other one I completed is the same colour as one I uploaded some time ago. This stamp is just perfect to make lots of simple cards in a hurry :o)
Jackie xx
Posted by Jackie at 08:04 17 comments:

More playing on the Cricut

Good morning Bloggers, I hope you're all well or getting there :o)
I've been playing with SCAL again and designed the fat snowman and his hat, and the snow family and I am quite happy with them. Sorry about the shadows, the sun was quite strong. 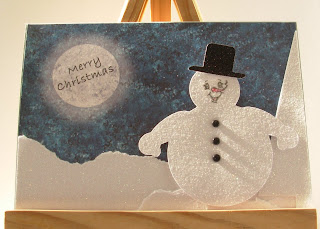 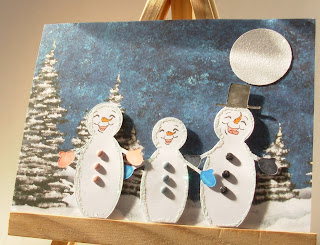 I am not so sure about the cards but I just wanted to use the snowmen! Hopefully I'll do better next time LOL.
I used Peachy Keen face stamps on them coloured with copics. I found this ancient HOTP paper from stash :o)
Jackie xx
Posted by Jackie at 08:17 11 comments:

Good morning everyone, the sun is shining and it's wall to wall blue skies at the moment, but thankfully not hot. I don't know what happened to the downpour we were supposed to get yesterday!
Anyway, on to my card, which I made a couple of weeks ago and promptly forgot about it (another senior moment)! 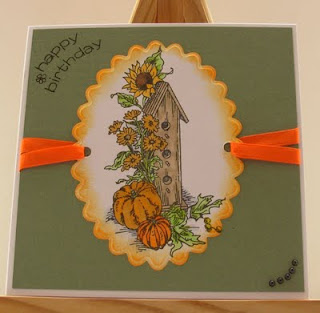 It's another basically quite simple card.
Cut and folded white card to 6x6
Green card from old HOTP Christmas stack
Stamped at a friend's house so don't know the make. Coloured with copics then cut with Xcut nestie, then sponged edges.
Ribbon scrap from stash
Woodware sentiment, bent onto the block,  with tiny hand drawn flower, and that's all there is to it apart from the copic coloured string of pearls :o)
Jackie xx
Posted by Jackie at 08:34 12 comments:

Good morning everyone, I hope the day is treating you well and continues to do so.
No card from me today so far, I just wanted to share my little garden visitor with you, isn't he gorgeous :o) 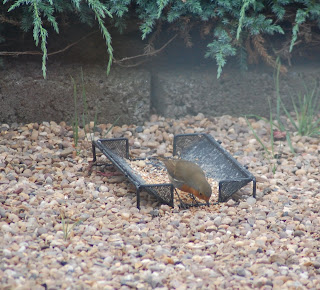 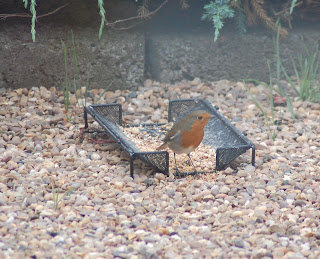 He obligingly posed long enough for me to take about 16 pics :o)
Jackie xx
Posted by Jackie at 07:48 7 comments:

Good morning everyone, I hope all is well with you.
I bought this gorgeous rusty coloured pearlised card from Byrkley Park a couple of weeks ago - sadly there will be no more :o(  - and wanted to do something with it. Here is the result which I am quite pleased with :o) 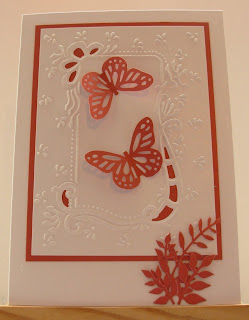 Quite a simple card, I cut and folded the base card to 5x7 which seems to be my favourite size lately. Martha Stewart flutterbies, Leone Em leaves and Marianne Designables cut & emboss folder. That's all there is to it No stamps, no inky mess :o)
Jackie xx
Posted by Jackie at 07:24 16 comments: 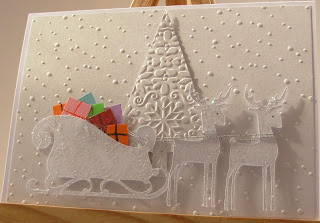 YAYYYYYYYYYYYY, it worked :o)
It's amazing what you can find in your forgotten files isn't it! I found this sleigh and reindeer files so I just had to have a play didn't I, LOL
They were cut on the Cricut of course and I cut the tree by hand then put it through an embossing folder to give it some texture. I coated the sleigh and reindeer with glamour dust but should have waited until the card was finished because some has rubbed off but never mind, I can add some more nearer to Christmas. I cut a few small squares from scraps for the parcels :o)
Jackie xx
Posted by Jackie at 10:11 17 comments:

Just been trying to upload and blogger won't co-operate so I will have to pop back later if I get the chance :o(
Jackie xx
Posted by Jackie at 09:44 1 comment:

A bit of an experiment

Good morning Bloggers and what a lovely calm, sunny day it is so far :o)
I was spending time punching flutterbies and leaves out of scrap bits of silver mirri and white pearlised card using Martha Stewart and Leone Em punches and then decided I should use some of them to make up a card. Not too sure about this one as it was an experiment, but I thought I would show you anyway :o) 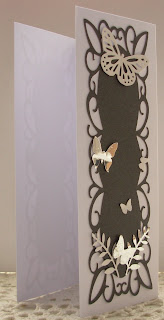 I had meant to do a gatefold card for a change but silly me, I folded it wrong so it ended up being a tall slimline one and didn't want to waste the card! I still have to do something with the inside.  I cut the background on the Cricut :o)
Jackie xx
Posted by Jackie at 07:54 12 comments:

Good morning Bloggers, I hope all is well with you.
It's looking a bit dull here so far but still very warm!
I stamped this beatiful image up at a friend's house so I don't know where it's from.
Such a beautiful, delicate looking stamp. 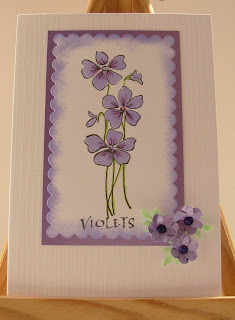 I coloured it with copics, of course, cut it out with Xcut nestie then sponged the edges with Brilliance inkpad.
Punched flowers with Woodware punches from pearlised paper, same as the mat.
Leaves are from McGill or Leone Em punch, sorry can't remember which! I cut and folded linen card to 5x7 :o)
Jackie xx
Thank you very much to Viv  who tells me that this is a Hampton Arts stamp,
thank you Viv :o)
Posted by Jackie at 07:39 12 comments:

What an appropriate name for a flower on this beautiful sunny morning. I hope you are all well :o) 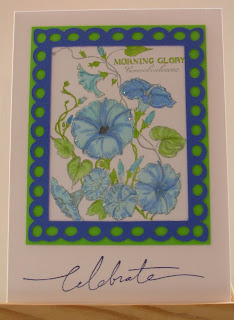 It is basically a very simple card. I cut and folded plain white card to 7x5. It's an old PSX stamp I found hiding in the bottom of a box so I thought it was time to ink it up as it it really is beautiful. Coloured with copics of course, with a smidgin of glamour dust added. I cut the frame on the Cricut and matted onto lime green card. Sentment is SU. :o)
Jackie xx
Posted by Jackie at 08:17 13 comments:

Good morning Bloggers, I hope all is well with you :o)
I am not too sure about this one. I've been playing with SCAL again and this is what I came up with. 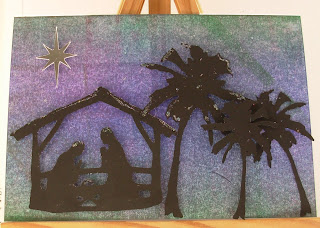 I cut and folded the 7x5 basecard then brayered with a Big & Juicy inkpad. The nativity scene is from Scrapping Table,sorry  I can't rememeber where the star is from. I converted the palm tree into an svg file from a silhouette by my good friend PatEssex on DC. All elements were cut on the Cricut.
I have to go to work this afternoon but I hope you all have a great weekend :o)
Jackie xx
Posted by Jackie at 07:34 16 comments:

Good morning everyone, I hope you are all well or getting there :o)
We have the much needed rain here at the moment but it's not much more than drizzle!
I was lucky enough to have the camera handy yesterday when this little beauty decided to visit one my buddliea bushes, isn't it just so gorgeous? 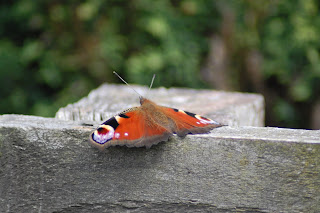 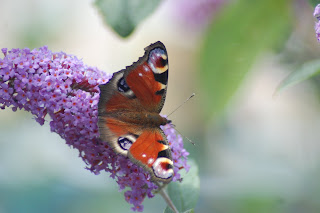 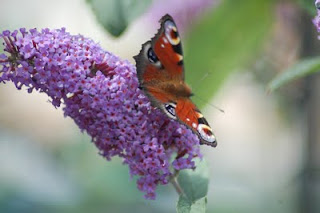 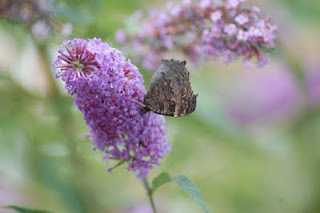 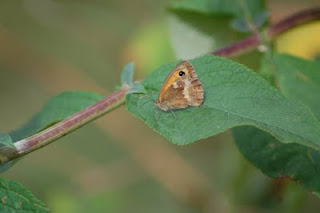 It's not hard to see why they are called peacock flutterbies :o)
Jackie xx
Posted by Jackie at 09:42 15 comments:

Brilliant Sunday and a couple of cards

Good morning everyone. We've got gorgeous sunshine and white fluffy clouds at the moment but thank goodness it's not hot and sticky.
I've got to try and play catchup today now that the gas safety chappie has declared me safe for another year and gone.
Now I have to say that Sunday was a very special day as I played hostess to our little crafting group this time and we had a wonderful time. We even had an unexpected visitor join us from Spain. Yes she came over specially for our get together.
We always start the day with bacon butties, then it was off to Byrkley Park for some retail therapy and back home again for philly and crackers with a bit of salad followed by fresh fruit salad.
Then came the chatting and laughing with a bit of crafting thrown in.
For dinner I made a humongous meat and potato pie which we had with veggies followed by a huge birthday cake because one of our group has a birthday coming up.
We even had some drama next door as they decided to have a drunken fight and she ended up being carted off to the cells for the night while he was taken to the hospital bleeding badly and in a daze. I believe the deadly weapon was a flying can of catfood!
Anyway, before you nod off, I had better put my cards on :o) 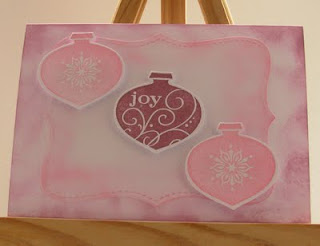 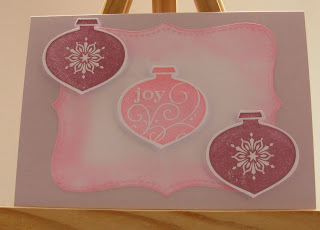 In the pink and blue

Good morning everyone.
I know most of you are sun worshippers but I am soooooooooooo wishing for cooler weather. I have had enough of all this sticky stuff, it's purgatory for me :o(
Okay, moan over.
Surprise Surprise, I have been playing with SCAL again and made these 2 cards for the box. 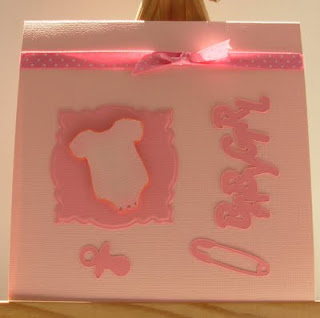 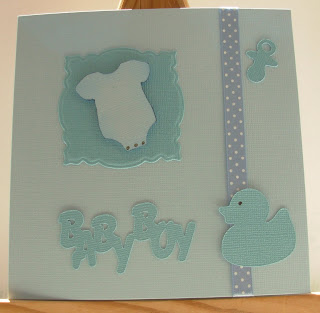 Base cards are Bazzill. With the exception of the Xcut nestie squares, all the elements were cut on the Cricut. I created the words from the SCAL font library using Balloon font and the others are from the SCAL shapes library :o)
Jackie xx
Posted by Jackie at 08:18 19 comments: