My week is nearly over already BooHoo + a few orang Utans

Good morning everyone. I cannot believe how quickly my week's holiday is flying by. I have spent two days putting flatpacked stuff together and the air has been quite blue over Borrowash! My old computer dest was huge and took up too much space, so off I went on Wednesday morning to Staples and bought a small desk. Got home and put it together, fine, but taking the old desk apart was a nightmare!!!!!!!!!!!!!!!!!!!!!!!!!! Never mind, it's done now and I have a lot more space in here. Being a glutton for punishment, I then went out and bought two bookshelf units and a TV stand and yes, they all had to be put together Grrrrrrrrrrrrrrrrrr.Why do I start these things?
Anyhow, enough chat, here are my cards for today, As always I really enjoyed making them and learned that I like printing straight on to Bazzill :o) 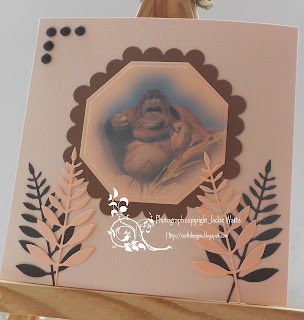 All of the photographs are printed onto peach Bazzill, this first one also has a pale peach Bazzill base card which I cut and folded to 6x6 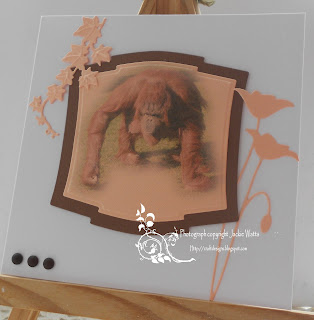 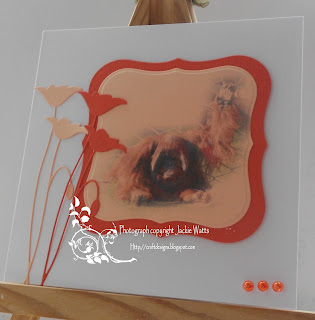 For the other two cards, I cut and folded white linen card to 6x6. The images and mats on them all were cut with nesties and the dies are all Memory Box except the Ivy, which is a Marianne die. I hope you like them :o)
Jackie xx
Posted by Jackie at 10:33

Hi Jackie
Sounds like you have been busy and your cards are all fabulous
Hugs Dianne xx :)

wow hun these are super...love the peachy one my fav makes a change from white or cream.....love the extras too great work..shame your holiday has gone so quick wish work went as fast lol!!!! hugs sassy

Hi Jackie, Love your cards, they are gorgeous and the dies are fab..so pretty...

It can be hard going putting furniture up and they don't make it easy do they....well done you, bet it looks fab.xx

Oooh Jackie what beautiful cards and photographs again.Don't the weeks just fly by! It seems you have been very busy this wee. Colin is the same he has been making wooden units for the garage to store all his stuff in.I do hope you managed to relax in between Jackie :) Viv xx

Hi Jackie, printing on to Bazzill is something I've only just heard you can do ... I have to admit I didn't even think to try it ... and your photos have come out beautifully.

Isn't often the way of it that 1) older pieces of furniture are the very devil to take apart ... could be because we put them together to stay together ... and 2) that one thing leads to another, your bookcases being an good example ... and 3) putting flatpacks together is never as easy as it looks - bet your happy with the results though :)

Savour every minute of what is left of your holiday. Elizabeth x

These are wonderful Jackie the images made me smile.
Kevin xx

Love your cards Jackie, love the images and the dies finish them off beautifully. Hope your relaxing after your diy day. Enjoy the weekend. Carolxx

I love these Jackie but i would as i just love watching Orang-utans chimps and gorillas . Have a lovely weekend. luv gina xx

Finally managing to catch up with you, just don`t know where the time goes. Your cards are wonderful. Chris xx

Hi Jackie, Gorgeous cards, always a pleasure to pop over to see what your up to hun.xx

Jackie, what a lovely warm glow the peach bazzill gives the pictures, I like the look a lot.

Sounds like a lot of hard work all that furniture assembling and removing....least it's done now and the extra space is always very welcome! CoB