Good morning Bloggers, I hope all is well in your world...hugs

I have been printing/stamping/colouring etc to catch up with the cards filched by my lovely Grand-daughter, managed to get several toppers made and I have enough bits and pieces on the go to make about 16 cards. My worktable is looking like a production line at the moment LOL.

I have two similar, but not the same, cards today, both very simple to make! 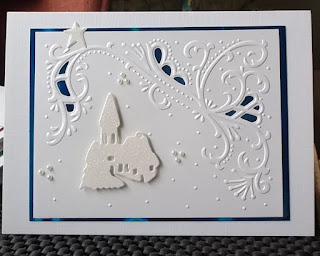 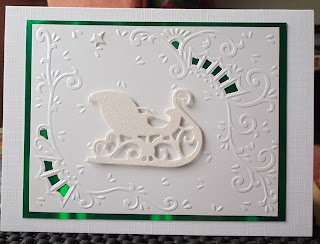 Both basecards are my usual white linencard from The Range, folded and cut to 7x5.
Both cards have a mirri backing layer, one blue one green.
I used two different Marianne Cut n Emboss folders on the pearlised white panels.
Blue one has a Lea'bilities diecut from white glittercard scrap, green one has a Marianne sleigh diecut, also from white glittercard scrap.
The little star on each card is a Lea'bilities diecut.
As I said earlier, very simple :o)
Jackie xx
Posted by Jackie at 08:06

These are beautiful, very elegant

Beautiful and brilliant creations in white on white, lovely. .xx{The Journey Is The Start aNNie my personal blog}

These are fab hun, so classy, and very festive indeed. Hugs xx PS. There's nothing wrong with red as a colour, it's the inks, the red, black and dark blue all behave in a very odd way and it's the devil's own job not to leave watermarks all over the place!!

A production line for these beauties? They're fabulous! Love the White on White - with that splash of blue showing through, and the blue frame - perfect!

Both are so very elegant Jackie.

Hi Jackie these are gorgeous Christmas cards. Have a great week. Hugs Jackie

Thank you I need ideas for that folder Your cards show much class .........Lis

Soo pretty, love the hint of your mirror card peeking through the embossing :)