Made in the old fashioned way

I have had several enquiries about how Stephen is getting on, thank you for asking, it's lovely to know that people care :o)
Stephen is now walking without his stick and goes out every day for a couple of hours, sometimes longer. I would love to know where he goes but he can't tell me as he still cannot talk very well. He has lots of words now but is still not able to put them together to make sentences. His arm is still paralysed but he does now get tiny flutterings in his hand and he can move one finger just a tiny little bit. This is such a great step for him :o)

Meantime, what does my title mean? Well, whilst I was looking for something else, I found my box of brass stencils and light box so I decided to have a play with them and here is the result :o) 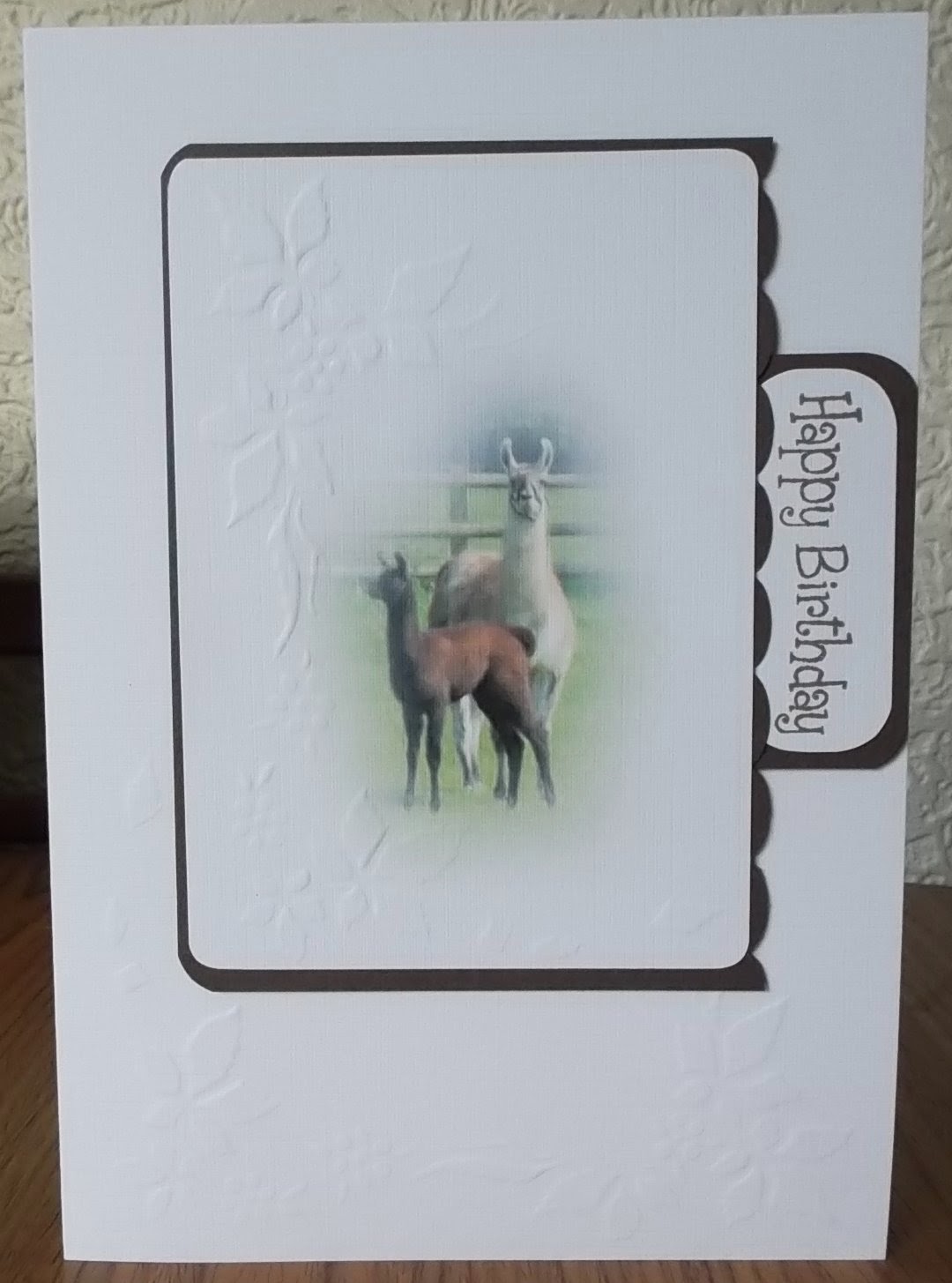 My own photograph of course, taken at a farm in Spondon in September 2007.
I used brass stencil, ball tool and light box for the embossing. It doesn't show up too well on here but it looks fine IRL.
All white card used is linen from Papermill Direct and brown card is from PDA cardcraft.
Martha Stewart edge punch used on brown mat.
Sentiment is from a Stamps and Smiles set.
Did you know that in South America, Llamas are trained so that they can be taken into hospitals to visit patients? They are said to be very therapeutic :o)
Jackie xx
Posted by Jackie at 07:45

I am pleased to hear that Stephen is doing so well and is making such good progress.
Your card is gorgeous Jackie, such a beautiful photo and the embossed design using the stencil looks fabulous.
I hope you have a good Sunday.
Sue xx

Your card is, as always, beautiful Jackie.. I have a light box and lots of brass stencils hidden away too.. my goodness, maybe I'll use them one day!

So glad that Stephen is progressing.. I think I'd probably be tempted to follow him to see where he goes! LOL!

Your photo and stenciling are absolutely lovely.
Llamas are an interesting animal for sure.
Happy to hear Stephen is progressing so well.
Myrna

Another lovely one Jackie. So nice to see your work with the stencil and light box, hope you do some more. Really pleased to read of Stephens progress. Tracey x

Thanks for the update on Stephen on my blog, so good to know he is making progress. Gorgeous cas card

Hi Jackie what a wonderful card show casing another lovely photo. Glad to hear your son is making progress Jackie. It must be so difficult for him and for you but what a great support you are for him.
Hugs Lynsey x

Hi Jackie oh wow that's amazing your son has made such a huge progress! I'm so happy to hear this, it sounds like he's loving his walks bless him. I think it's fantastic Stephen has lots of words too he sounds like he's doing great :) I hope your okay.

Your card is beautiful! You are so good at putting your photos on your cards I could stare at this forever! They should use Llamas over here how fun would they make a hospital appointment :)
Huge hugs to you, I think your doing an amazing job with Stephen and I'm sure he is extremly grateful
Vic xx

Hi Jackie, so happy to hear of Stephen's progress - I do think of him often. It's a long, slow process but he has come so far when you look back to when he first had his stroke. He is so lucky to have you to encourage him and help him.

Your card is stunning and your embossing is so beautiful! I haven't done any embossing like this for ages - probably not since I bought my Cuttlebug. Guess I kind of forgot about it as I used to do it alot. Oh, it would so FUN to have a Llama visit a hospital. We have dogs here that visit my daughter's hospital and they brought her alot of comfort when she was in there.