Anniversary in the round

Good morning everyone,  I hope all is well in your world...hugs
It's too early to tell what it's going to be like out there but it is raining at the moment!

I have now been off the statins for a month, and it hasn't made one iota of difference to my aches and pains, so I am going back on them on Friday. At least I have proved that it's not them that's making it worse!
I have a few friend's anniversaries to make cards for this year and here is one of them, I decided on a shaped one for a change, this one is 7" 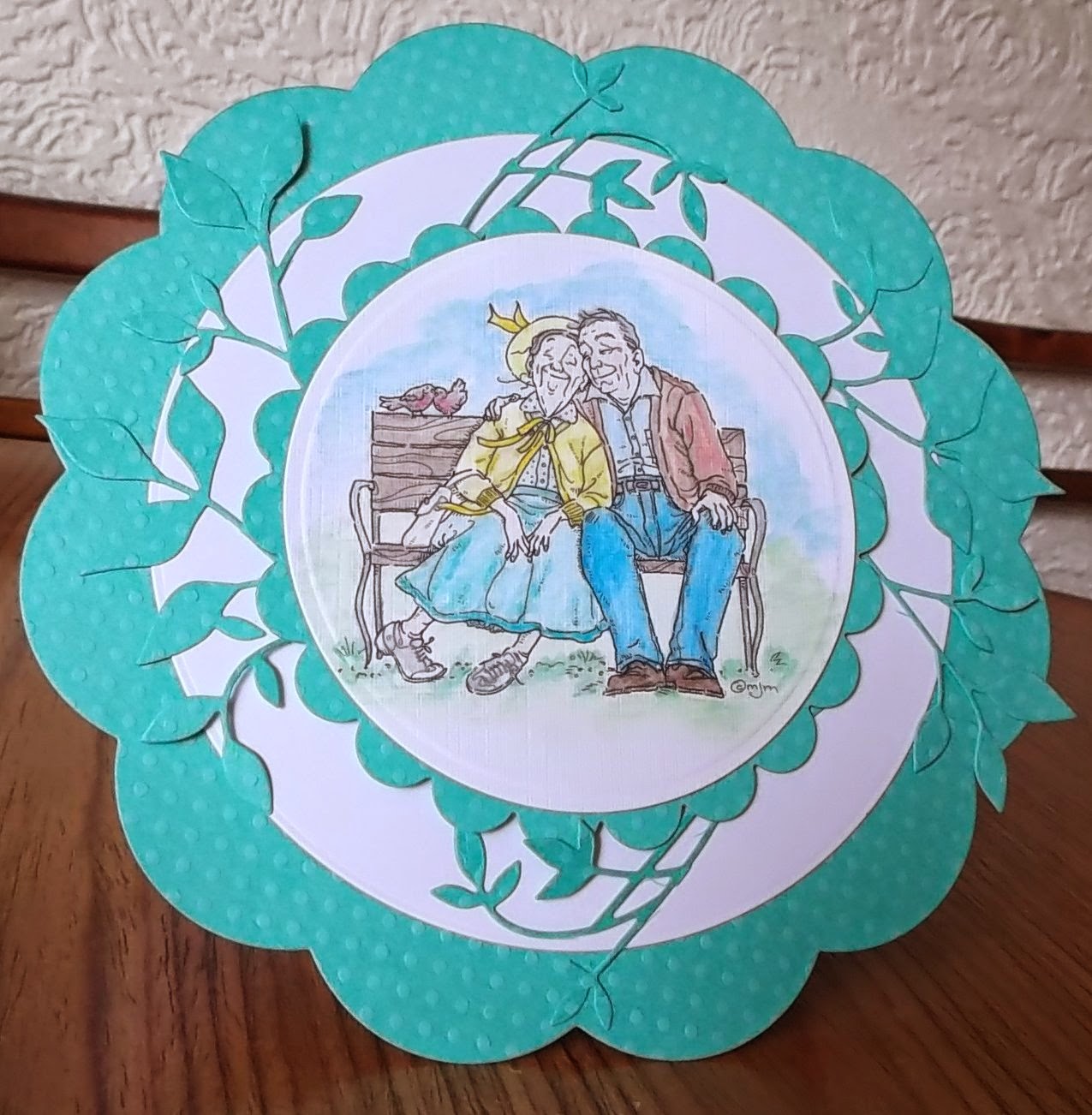 Base card cut from Bazzill Basics (which I have had forever)  and the back is plain white, with a score 1" down to allow for opening.
Image is an old one from Mo's Digital images, coloured with Caran D'Ache watercolour pencils, then cut with Xcut large die, as is the larger white mat. I used Spellbinder's Grand Nesties for the rest. Foliage is Memory Box die cut.
I hope you like it :o)
Jackie xx
Posted by Jackie at 06:04

Gorgeous card Jackie.....the shape is great, and lovely coloured too.

When my mother stopped taking statins, the shoulder pain she was troubled with did ease.....do you take cod liver oil at all? This is one thing that she and my dad swear by.

Great design and colours. Hope you find something to ease that pain

What a lovely vibrant card, the elements work so well together!

This is beautiful Jackie and I love the scallop card and lovely image :)
Oh I'm sorry to hear they didn't help with your pains I hope your ok and not in too much pain,
Hugs
Vic x

Would love to be able to get us so early Jackie, never mind, keeping my fingers crossed for a lovely day here! Lovely card , love the shaped card, beautiful blue, my favourite colour and love this image from Mo's. Hope the day turns out the way you want it! Carolxx

Your card is gorgeous Jackie. I love the image and beautiful colours.
It's a shame that stopping the Statins didn't help with your pains but at least you tried!
Sue xx

Love this image and the colours are fab too, lovely card Jackie :o) Hugs, Lisa x

Gorgeous card Jackie, I love this image, the shape and the foliage
Kevin xx

Aside from the shape of this lovely card I am completely in love with the adorable image..........Lis

Such a beautiful card Jackie, love that image and scollaped shape too. Sorry about your aches and pains, hope it eases soon :) Viv xx

Awwww great card, your friends will love this :)

Oh, I am so sorry that going off the Statins didn't make any difference to your aches and pains :-( Hope that you can take something that will help the pain but not have any side effects that are difficult to cope with.

Great, FUN card and love the shape (I forget to make other shapes of cards - don't know why as I love them when I do them!). So beautifully coloured too.