Back to my photographs...

...which I have sadly neglected of late!

After cutting out some of my own mats, I had several of these squares left so what should I do, throw them in the recycle bin or use them? I had an idea to use two of them so I may have a go at playing  with more of them because I am quite pleased with this effect :o)

Anyhow, on to my card for today. 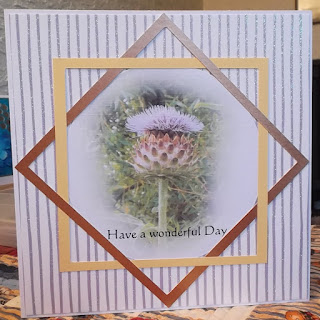 Basecard is 8x8 ready folded from a Papermania pack.
Striped glittercard layer is from my stash, found it in several colours at the bottom of my glittercard box. Had it so many years I have forgotten where from!
Own thistle photograph taken at Mercia Marine a few weeks ago. I have never seen such large thistles, they were about 10 foot tall and I am not exaggerating, the flowers were huge and perfectly formed. I feathered it in PSP7 then opened it in MS Word and added the sentiment, then printed onto my usual white linencard from The Range before cutting it with an Xcut large circle die.
I intertwined the squares and attached them to the circle before adding them to the card.
It's not very often I say it of my own work but I really like this one :o)
Jackie xx
Posted by Jackie at 07:52

It's fabulous Jackie... and a very clever idea to use those squares to frame the fabulous photograph!

Your photo's are always a delight Jackie,love what you have made.xxx

Beautiful card Jackie, love the design using one of your fabulous photos.
Taken some of your hugs thanks, sure do need them this week! Dad's funeral on Thursday:(
Wendy xx

Super card. Love how you've made the frame - glad you didn't throw it away! :-)

Having a really quick catch up as not been able to blog for the last week so sorry for lack of visits but a great card as always Jackie.

Beautiful card Jackie, I like the photo and the design
Kevin xx

Great design Jackie, love what you have done with the squares.

Popped in whilst having a break from packing to come home tomorrow(sob sob!). Lovely to see your photographs again Jackie - fab card. x

Hi Jackie this is stunning I love the design and the photo is gorgeous. I always like it when you use your photos. I am not surprised you are pleased with this one. Have a great week. Hugs Jackie

This is gorgeous Jackie, I love your photo and such a fabulous design.
Sue xx

Love the linked frames This is lovely......Lis

I think we all love to see your gorgeous photo's Jackie, and I love your layout and good use of the frames...enjoy your day...xx

Hi Jackie, lovely to see another of your wonderful photos showcased on a beautiful card!
Hugs Lynsey x

Fab photo Jackie, I LOVE how you framed it!