Good morning everyone, I hope all is well in your world...hugs

Sorry it's another Christmas card but it will soon be here. I've been making them all year round but still only halfway there! I promise that the next one I post won't be a Christmas card, not so sure after that though LOL. 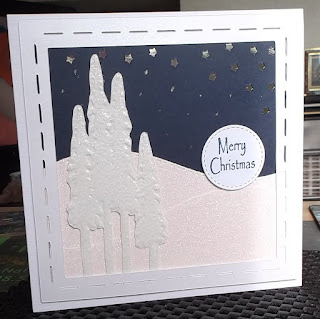 Just a simple scene but several layers about 6 of them!
Basecard is my usual white linencard, folded and cut to fir into a 6x6 envelope.
I designed the starlayer in SCAL and cut with my very old Cricut, then backed with silver mirri card.  the smaller stars were added with silver Sakura pen
Wavy glittercard layers cut with Spellbinder dies.
Tall trees embossed with Tim Holtz/Sizzix embossing folder, then handcut.
sentiment stamped with Anita's stamp then cut with Die-namics die.
My own stitched squre mat made into frame.
I have seen similar scene cards in Docraft galleries so I have to say it is a mishmash inspired by several people :o)
Jackie xx
Posted by Jackie at 07:00

Gorgeous card Jackie, I love the beautiful scene you have created...xx

Beautiful card Jackie perfect for the festive season and loving the dies used.x

Such a clean, elegant Christmas card!

Hi Jackie this is a gorgeous Christmas card I love the design. Hugs Jackie

Lovely white Christmas look card, Jackie. Ive been making some too, four in two days, a record this year for me lol! Wishing you well. Carol xx

This is gorgeous, I love the scene you have created.
Sue xx

Such a fab Christmas scene Jackie, I love it!
I need to get a major move on with my Christmas cards!

A lovely card Jackie. You are very wise making your Christmas cards throughout the year - I haven't really started making mine yet and I know it will be a made panic to get them done.Sue

Great card and I love the use of the dies, it's created a lovely scene.

This is gorgeous Jackie... I LOVE that starry sky and all the white on white - a perfect card!