Good morning everyone, I hope all is well in your world...hugs

I am very late this morning, but better late than never LOL.

I made this card for my friend to give to one of her friends, a 92 year old lady who loves football (her son is a well know footballer/manager of yesteryear) and dancing. Even at 92 she still dances around her kitchen to the music on the radio!

I only had 24 hours notice to make it and deliver, so imagine how mortified I was to see a glaring error on the photograph I took, and it was far too late to do anything about it :o( 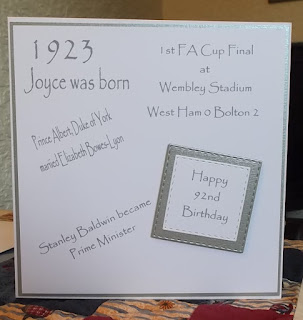 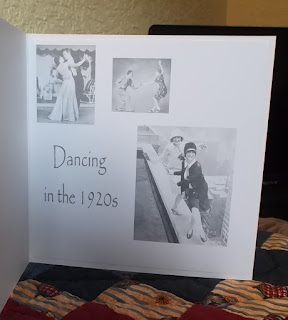 Happily, the recipient was absolutely delighted with it and even thought the mistake
was funny!
I was told the lady didn't like fussy, and this certainly isn't that!
I googled 1920s dancing for the inside. I must say those intrepid ladies dancing on the rooftop make me a tad queasy!!!
I used the Papyrus font for all of the text.
Basecard is my usual white linen from The Range, folded and cut to nearly 6x6.
Other card used is pewter textured from PDA.
Not a lot else I can say about it, except that I am a lot more careful now before printing
stuff out :o)
Jackie xx

Just a quick visit to say hi as I do a mega catch up with my fav blogs after hols, lovely work as always and how very special for the lady who sounds amazing for her age.

Fabulous card and at such short notice too :-)

It's a love card, love all the detail. What was your mistake or should I have spotted it?

Lovely card specifically for the occasion, you did well I thought.xx

Hi Jackie this is a fantastic card I love the design. Have a great weekend. Hugs Jackie

What a great card! Even better considering how long you had to plan and deliver it! Didn't spot the mistake at first! Still great though! I might borrow that idea for my FIL who is 95 this year

Such a fabulous personalised card Jackie. I love the design. It took me a while to see the error!
Sue xx

Morning Jackie, you have been busy with some lovely cards. Mistake or no mistake, I think your card is smashing and a great idea. Take care Tracey x

I think it is a great card considering the difficult criteria you were given!

Wow Jackie, that's a fab make with such little notice! Shame about the mistake, took me a while to find it though!

Great card Jackie, but I don't think I have the mistake unless it's 'Baldwin'....am I right...haha..x

Hi Jackie! A quick visit - sorry can't comment on everything - am hoping to have a couple of hours this afternoon with some stamps and inks (2 weeks till am home properly!)- what a lovely personal card this is - am sure the recipient loved it. Great job. xx

Brilliant card....Had to read it twice to see the mistake...Joolsx

You will have to tell the mistake I sure can't find it ....Lis

This really is fabulous and must have been so well received with all the personalisation of the date! AND... I would never had noticed where the mistake was if I hadn't read your other post first! See what I get by playing catch up?? hehe!